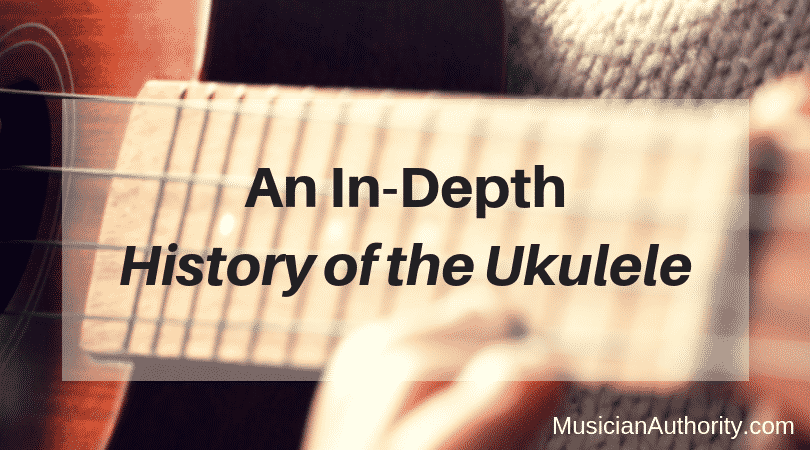 The ukulele is a sibling instrument to the guitar. It is played with only four strings. And there are four sizes of ukulele: soprano, concert, tenor, and baritone.

Its sound is a bit nimble and dainty. Yet, the instrument is an attention catcher.

The ukulele, with its Hawaiian name and Portuguese roots, has a rich history. One that unfortunately doesn’t give us the exact name of its actual inventor.

The story of how this little instrument became one of the world’s most coveted sounds still is an interesting one. Want to know more? Continue reading and we’ll break down the full history of the ukulele.

The Origin and History of the Ukulele

It’s been said often (and incorrectly) that the ukulele was invented in Hawaii. But in all actuality, the instrument originated in Madeira back in the mid-1880’s.

Madeira is a small mountainous island in the Atlantic. Its location is southwest of Portugal and close to the coast of North Africa.

The climate in Madeira is tropical and heavily forested. At a point, it was known for its thriving timber industry. The island also has a rich history of making furniture.

Moreso, Madeira is known for producing grapes and winemaking. Wine originally became popular back in the 16th century because it wouldn’t go rancid during long sea voyages. We’re sure the warm, fuzzy feeling people got when they drank it didn’t have anything to do with Madeira’s bustling wine industries.

Madeira was a sought after tourist spot for people traveling for Europe. They loved its exotic plants, beautiful landscapes, and unique music culture.

Funchal was a bustling port city in Madeira where tourists would travel to watch street performers play their music. Because of the hot, muggy climate, the houses on the island weren’t built with encased windows. So, even the locals would get to constantly hear the music during the day and night.

Local musicians in Funchal played waltzes, mazurkas, and folk songs on Spanish guitars and a smaller, yet similar instrument. The instrument had four strings and was known by quite a few names.

The most common name was a machete. People also called it the braguinha, or the machete de Braga, which pays homage to the city in northern Portugal where the little instrument originated.

By the mid-1880’s Madeira was no longer a fun, tourist spot. It was no longer the place everyone wanted to travel to. It ironically became a place you’d want to travel from.

How did such a buzzing place become a world locals wanted to escape? The wine industry collapsed after a series of natural disasters. The disasters also made it difficult to cultivate wood for furniture and other means.

These events ruined the once robust economy and covered the island in poverty and famine.

Hawaii had a lucrative sugar industry. But its locals had run into a serious problem. This time period was decades after European colonization had brought diseases and death to the island. So, the population was quickly declining.

This meant that there weren’t enough workers in Hawaii to work on the sugar plantations and in the factories. Farmers were desperate to find help with all of this work, so they searched the world for it.

When the search reached Madeira, it stopped. More than 25,000 Madeirans happily traveled the 12,000 to Hawaii to work in the sugar industry.

They’d signed three-year contracts to work in the fields for $6-$10 each month. On top of a regular salary, the Madeirans were given room and board along with a ship to sail to Hawaii on.

The Machete Comes to Hawaii

Among those who traveled to Hawaii were three woodworkers their names were Manuel Nunes, Augusto Dias, and Jose do Espirito Santo. They also brought their families with them. The men and their families were originally from Madeira’s port city, Funchal.

They arrived in the Honolulu Harbor, on the 220-foot long British clipper ship, SS Ravenscrag in August of 1879. It took four months of ocean travel to cover the 12,000 miles from their home island.

One of the passengers, Joao Fernandes began to play music from a machete to celebrate at the time of the ship’s arrival in Honolulu.

Not long after their entry, the following was published in the Hawaiian Gazette: “…Madeira Islanders recently arrived here have been delighting the people with nightly street concerts. The [m]usicians are fine performers on their strange instruments, which are kind of a cross between a guitar and a banjo, but which produce very sweet music in the hands of the Portuguese minstrels.”

Hawaiian locals were fascinated by the machete and the immigrants who’d introduced them to it.

After Nunes, Dias, and Santos completed their contractual obligations at Hawaii’s sugar plantations, they traveled to Honolulu with the hope of finding work in their professions of woodwork. Lucky for them, there was a flourishing furniture trade in the city at the time. There were over a dozen woodworking businesses and shops for the men to work in.

Nunes and Santo were able to land jobs at the largest furniture store in Hawaii, which was called the Pioneer Furniture House. While Dias opened his own woodworking shop.

Dias also settled in Honolulu’s Chinatown district. It was known to be a bit seedy and low budget. But Dias made both furniture and instruments there, so it seems to have been a good move.

Within a year of their arrival, Nunes opened his own shop. He’d called himself a “maker of guitars, machetes, and all stringed instruments.” Not long after, Santo opened a shop on the same block as Nunes’.

Nunes, Santo, and Dias made the most of their instrument and woodwork. Not only did they build and sell instruments, the men would do repair work, sell strings, and sell commercially produced instruments.

Who Built the First Ukelele and Who Named it?

It isn’t clear whether any of the three men from our story built instruments prior to immigrating to Hawaii. The general assumption is, however, that Nunes, Dias, and Santo began building instruments to generate income while seeking woodworking and furniture making jobs.

Think of it as a side hustle that grew into something bigger.

It’s also been said (but never proven) that Nunes was somehow related to Octavianno Joao Nunes da Paixao. He was a prestigious instrument maker from Madeira who died in 1874, not long before the immigration to Hawaii.

No one really knows who built the first ukulele. We just know it traveled to Hawaii from Madeira as a machete.

In his advertisements, Santo would say that he was able to “make guitars of all sizes.” But Nunes openly said he’d invented the ukulele in newspaper ads and even on his instrument labels. Although, his claim as the instrument’s inventor is a little sketchy, to say the least.

Apparently, the word “ukulele” means a couple of different things to different people. Which adds to the depth of its history. To start, an instrument wasn’t called a ukulele until a decade or after the men arrived in their new promised land.

The word ukulele did, however, belong to Hawaii long before they knew about the instrument. In an 1865 Hawaiian dictionary, the word ukulele was defined as “a jumping flea.” Cat fleas were pests that made their way to Hawaii decades prior.

The first story regarding its name is that ukulele is a Hawaiian word that roughly translates to “jumping flea” in English. You remember Joao Fernandes, right?

Joao Fernandes played the instrument with feverishly with such amazingly fast moving fingers, the Hawaiians would say his fingers looked like a jumping flee as they’d move over the fingerboards of the instrument.

Another story is based on an Englishman, Edward Purvis playing the instrument. He was the Assistant Chamberlain to Hawaii’s final reigning king, King David Kalakaua.

It’s been said that Purvis was given the nickname “ukulele” because he was a small, highly energetic man. In this instance ukulele still means jumping flea. Additionally, it’s been thought that (but again, not proven) that the instrument Purvis played for the king also had the same name.

There are tons of reported stories explaining how the small instrument got its name. But we’ll cover just one more.

Hawaii’s last monarch, Queen Lili’uokalani has said that the word ukulele is a combination of words that translates into “the gift that came here.” The root of the word, “uku” is a gift or reward. Lele means “to come.”

Queen Lili’uokalani, like many of Hawaii’s leaders, was also a musician and lover of art. She composed “Aloha Oe,” which translates to farewell to thee.

The song is a valuable and sacred part of Hawaii’s history. The queen wrote the song prior to ascending the throne after her brother.

According to researcher Leslie Ann Hayashi’s book “Aloha Oe: The Song Heard Around the World,” the song was written about James Aalapuna Harbottle Boyd. He was a military official who served the Kalakaua family.

She was riding horseback one afternoon in the Koolau Mountains when the inspiration for the song came to her. Some say that Queen Lili’uokalani wrote the song after having been betrayed by an affair between Boyd and her sister, Princess Likelike. But that’s just one of many stories.

The mele (which means song in Hawaiian) has since been covered by numerous artists, including Johnny Cash.

We already know the ukulele is an instrument that’s beloved by many. But did you know what the strings used to be made of? Do you know the highest selling ukelele song?

Here are some interesting facts:

Before George Harrison of The Beatles passed away, he collected hundreds of ukuleles. He’d play them often and give them away to friends

Early on, ukulele strings were made from cat or sheep gut. Now, modern strings are made from nylon.

However, you can still find gut strings in specialty shops if that’s your thing.

In 2008, singer Jason Mraz released a single called “I’m Yours.” It became the best selling ukulele song of all times.

It broke the record for the number of consecutive weeks spent on Billboard’s Hot 100 Chart. The song lasted for 76 weeks.

It is also the tenth best selling digital download of all time in the United States. Over 6 million downloads were sold.

Ukulele brands like Kala have reported a growth of 500% to 600% in recent years.

George Formby Jr. was a popular comedian who sang and wrote songs as part of his act. He’d use the ukulele when he sang but was often told his lyrics were too offensive. Here’s one of his most popular songs on video:

The ukulele can play both acoustic and electric notes. They are usually made from mahogany. However, cheaper versions for children are made from plastic.

Man on the Moon

After his moon landing, Neil Armstrong was put in quarantine for several weeks. Scientists were afraid that he may have picked up a foreign bacteria while he was in space.

He spent the majority of that quarantine time playing his ukulele.

Now that you know the history of the ukulele, are you ready to learn to play? Or maybe you just have a couple of questions about how you can improve.

Either way, we would love to help you out.

Send us an email today!