For years now, at-home audio recording equipment has been becoming more and more accessible to a wider range of people, due to costs going down.

No other company exemplifies this more than Focusrite, which brings out new models of their various ranges all the time, so you can be sure that you’re always getting the best.

Focusrite’s top-seller continues to be the Scarlett Solo model.

This fun-sized piece of equipment has been on the market since 2011, and in the years since, the Scarlett has made a name for itself as an affordable but incredibly powerful tool.

The signature red metal chassis is home to an intuitive audio interface that allows you to record multiple sources at once and control their audio levels without needing to faff about with different tracks.

Its small design can fit just about anywhere and is super easy to transport, which is just one of the reasons why Focusrite’s Scarlett Solo is so popular.

The latest generation is no different and manages to evolve past its predecessors to bring you a powerful and effective audio interface. 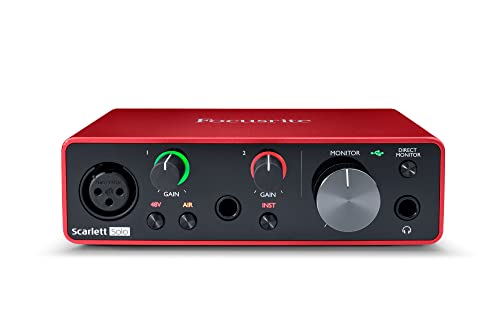 There are six different interfaces in the third generation of Scarletts. Some of these are direct replacements to ones found in the second generation and some have additional features like extra line-ins.

The smallest one of the range is the Solo, which is the product that I will be reviewing today.

This is a direct replacement for the second-generation Solo and so doesn’t feature anything new, but manages to upgrade the elements that it already has.

The best new feature that is included in the entire 3rd-Gen range is the Focusrite AIR feature.

This emulates the famous AIR Studios effect that lifts the high-mid tones, which was a popular characteristic of the original Focusrite studio interfaces.

The Solo’s speakers have been upgraded from RCA connections to two balanced TRS speakers on the back, giving you much clearer feedback.

There is also a free software bundle included with your purchase where you get Live Lite and Pro Tools First, and a subscription for Splice.

You also get a wide variety of plug-ins from Softube, XLN Audio, and Focusrite.

If you’re brand new to home audio recording then this might not necessarily mean very much to you, but trust me, all of the additions and software is going to help you massively if you properly learn how to use it.

Focusrite Scarlett Solo 3rd Gen USB Audio Interface, for the Guitarist, Vocalist, Podcaster or Producer — High-Fidelity, Studio Quality Recording, and All the Software You Need to Record
$119.99
Buy on Amazon

The Focusrite Scarlett Solo is, as previously mentioned, particularly small. It’s also very lightweight. You can transport it in your pocket if you need it.

Plus it’s USB-powered, meaning that you can plug it in just about anywhere – great for recording on the fly or out and about.

The interface features a mic input at the front, with a preamp that is common to the entire 3rd-Gen range.

A preamp takes a weak audio signal and converts it into a signal that is strong enough to be further processed and edited.

The preamps found in the 3rd-Gen Scarlett Range are confirmed to be Focusrite’s most powerful preamps they’ve ever made.

There is also a high-impedance instrument input (for a plug-in like a guitar or a bass, for example) that can take line-level signals from drum machines or synths, etc, with just the flick of a switch.

The product also features very helpful ‘gain halos’ around the front of the gain dials that are green when they’re processing audio with a good amount of gain, orange when it’s not as good, then red when the audio is starting to clip.

Finally, there is a Direct Monitor button on the front panel. This way you can hear what you’re playing and recording without any latency.

The front panel is very similar to the previous generation of the Solos, so if you’re familiar with the model, or you’re simply upgrading from this range, then you’ll have no trouble adapting.

The Solo, being the smallest product available, does also come with a somewhat limited flexibility compared to its larger counterparts, but they do all use the same preamp.

The most notable thing about the new range of Scarletts is the very noticeable lack of background noise or interference.

We tried it out on a variety of different instruments, including a particularly noise electric piano. I’m happy to report that the recordings that we’ve been able to create rich and clean recordings that are completely lacking in unwanted noise.

These are really clean interfaces.

The gain halos are a great indicator of whether you’re noise levels are getting too loud or clipping. The visual aspect makes it super easy to understand, even if you’re just starting out.

It’s not obvious on some other sounds, but it’s there when you need it.

The Scarlett is truely top notch. This interface is almost indistinguishable from any of the more expensive products on the market.

The latency between the time it takes for a signal to go through your interface, be processed by your computer, and back into your interface is dependent on a bunch of different factors.

However, the Scarlett haas a particularly low-latency – even with a lot of different varieties of instruments plumbed in.

So long as your computer is powerful enough to handle what you’re creating, the Focusrite Scarlett Solo will be able to keep up.

The 3rd Generation of the Scarlett doesn’t necessarily be a dramatic change from the previous, but there are definitely some important updates that were well needed to boost the technical specs and improving the user experience as a whole – especially for people brand-new to making music.

The Solo model is particularly good for entry-level or beginner musicians due to it’s easy portability and compact form. It easily suits singer-songwriters who want to record and playback on the move.

At its very low price point, the Scarlett is an amazing starting point for anyone wanting to get started recording audio or music, or people who want to evolve their recording capabilities.

The best thing is that the majority of Focusrite products work well with each other and can be interfaced together.

What Inputs Does The Focusrite Scarlett Solo Have?

The Scarlett Solo can take inputs from one XLR cable (typically a microphone), and one 6.3mm jack (the kind you use with an electric guitar or bass), then it feeds these into a computer via a USB cable.

Does The Scarlette Solo Need Any Specific Software?

No, there is no brand specific control software that you need in order to use the Focusrite Scarlett, but you will need to have some kind of audio interfacing software installed – such as Logic or Adobe Audition.

This way you’ll be able to actually edit

What Is Inst In Focusrite?

The INST are Instrument level switches for each input that alter the gain and input impedance to suit either instrument or line leve signals. The INST will illuminate red when Instrument Mode is selected.