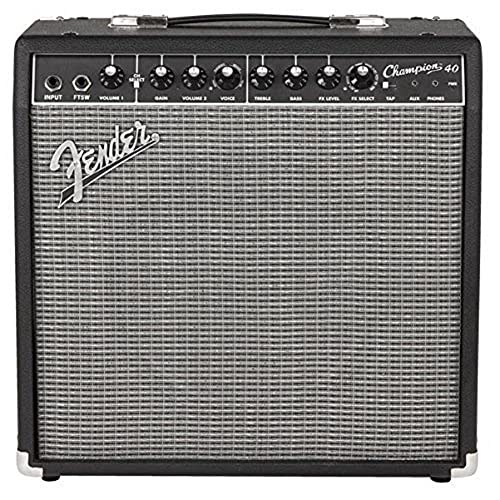 There’s no denying that a good amp can make a huge difference in how your guitar playing sounds, ramping up all the little details that make your musical expression unique.

When you’ve put in all the work and passion that it takes to learn how to play guitar, then you deserve to find the perfect amp to help bring out the best in your musical skills as you continue to grow!

In this article, we’ll cover all the key details that make the Fender Champion 40 unique so that you can make a solid decision on whether or not it’s right for you. 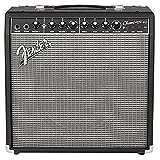 First things first: How does the Fender Champion 40 sound?

Most musicians have plenty of good things to say about the Fender brand, stating that it thoroughly deserves its status as one of the best brands out there when it comes to instruments and musical equipment alike.

The Champion 40 is no exception when it comes to the quality, dependable sound that people have come to expect from a Fender amp!

The volume of this manageably-sized amp might surprise you when you first try it out: Many people report that the jump in sound quality from the Champion 20 to the Champion 40 is surprisingly high, especially for the modest increase in price. Considering how lightweight this amp is at just under 19 pounds, it packs a lot of sound power for its size.

One appealing trait that you’re sure to enjoy if you go for the Champion 40 is the smooth change that it can make between sound channels when used with a pedal switch.

This is a distinct upgrade from the Champion 20, which is still a great amp but doesn’t get along as well with a foot switch.

Speaking of channels: If you like a clean tone when you play guitar, then this amp should definitely make a prime spot on your list!

Fender amps are known for the high-quality sound that you can expect from their clean channel, and the Champion 40 is especially crisp. Then again, if you prefer a grittier sound with plenty of distortion and overdrive then this amp provides a superior level of quality in that department as well, especially considering its competitive price tag.

Whether you prefer to play blues, rock, or metal, the versatility of the Champion 40 is sure to help you sound your best!

Another cool trait of this amp is that it’s built with an open back.

Musicians who have experience using and comparing a variety of amps are very familiar with the distinct differences between open-back and closed amps: Amps with closed back cabinets project more of their sound forward while amps with open backs do a better job of filling the surrounding space in all directions with sound.

An added perk of the Champion 40’s open back is that it provides a convenient place to store cables and other manageably-sized accessories–yet another detail that makes this amp great for band practice and traveling gigs.

Lastly, there’s simply something distinct about the sound of Fender amps that musicians everywhere have come to recognize.

The Champion 40 has Fender’s Special Design 12 speaker to thank for its crisp quality and powerful volume, and many fans of the brand swear that it has a sound like no other.

If you’re a fan of the unique sound that Fender speakers provide, then this hardy mid-range amp is nearly impossible to pass up.

How durable is the construction of the Fender Champion 40?

The Fender Champion 40 is constructed from fiberboard that’s as lightweight as it is strong and reliable.

One great detail in this area is that the lightness of this amp was not achieved by cutting any corners during construction.

Some amp manufacturers will compromise the bulk of the wood around the speaker fitting in order to pare down the weight of the final product–but not Fender. Subpar speak fittings will eventually result in internal damage as a result of the speaker’s vibration, which noticeably degrades the sound, overall performance, and longevity of the amp.

Thankfully, this won’t be an issue with the Champion 40!

The look and feel of this amp are designed to feel comfortingly familiar to long-standing fans of Fender amps and welcoming to those who are just getting acquainted with them.

The black vinyl shell and knobs with silver hardware and accents provide a look of quality and polish without drawing too much attention on stage. This amp will feel solid and withstand the rigors of performance or road travel, and it will look as good as it sounds while doing it.

Another pro in terms of durability is the fact that the Champion 40 is a solid state amp.

Since the guitar’s signal passes through electric circuitry instead of relying on glass like it would in a tube amp head, the components are less prone to breakage. The glass tubes also wear out much faster than the circuitry in solid state amps does and will need to be replaced eventually. But with the Champion 40, this isn’t something you’ll have to worry about.

How beginner-friendly is the Fender Champion 40? Is it complicated to use?

The Fender Champion 40 is relatively affordable, running you around 200 bucks when you buy it online. So, if you’re just starting out then you won’t have to pay an overblown price in order to get an amp with great sound quality and plenty of punch.

Along with going easy on your wallet, the Champion 40 is also designed to have a beginner-friendly user interface. Advanced guitarists would describe this amp as having a no-frills set of capabilities: It provides everything you need without cluttering things up with unnecessary extras.

You won’t feel overwhelmed when you start using this amp but you’ll still have access to all your favorite classic effects such as reverb, tremolo, chorus, and echo/delay.

The effects sound great, too!

They aren’t what you can expect from a high-end pedal, but they’re better than what you can expect from many other amps. There are also a couple of handy knobs for treble and bass when using the clean channel. What’s more is that people who have played with these settings compare the Champion 40’s clean sound to that of Twin Reverb amps–but for a very different price!

Alongside two channels and one input, the Fender Champion 40 provides a headphone output so that you can practice and adjust your effects in between performances without blasting others with too much sound. This is especially handy if you reside in an apartment or live with roommates or family.

Some people have mixed feelings about the layout of the controls on Fender amps when they first try them out, since it’s noticeably different from what they’re used to seeing on other amps. However, most people wind up falling in love with the interface once they give themselves a chance to get used to it!

Does the Fender Champion 40 have any shortcomings?

Speaking realistically, the most likely issue for you to run into with this amplifier is limited sound projection as a result of its size. However, whether or not this really counts as a shortcoming is a matter of perspective. Speaking objectively from a standpoint with realistic expectations, the Champion 40 does what it’s meant to do and does it well.

This amp sounds excellent for its size and does a fine job of filling a room when used for practice sessions, private recordings, and smaller gigs and groups. However, no matter how good a smaller amp is, it will never be able to fully handle the job of a larger one. You can’t expect a 40-watt amp to handle the same workload as a 100-watt amp, no matter how many other perks it offers. So, as long as you keep your expectations reasonable, this mid-range amp will excel at all it’s meant to do: Provide plenty of versatility and good sound projection for smaller gigs without weighing you down.

Some people also have mixed feelings about the difference in sound and the lack of natural overdrive that you’ll find in solid state amps like the Champion 40. However, these sound differences largely come down to personal taste and how willing you are to fiddle around with the controls to get the sound and level of overdrive that you want. Many musicians find the longevity of a solid state amp to be worth it, especially when it comes with as many possibilities for effect combinations as the Champion 40 does!

The Fender Champion 40 is a great buy for anyone who’s been playing guitar for a while and wants to get their hands on a good mid-range amp without spending too much. It’s also a great fit for beginners who intend to broaden their horizons as they grow and potentially get started playing in a band: This amp will hold its own in the garage or on a stage, enabling the group to find their ideal balance and sound.

The controls on the Champion 40 are also relatively beginner-friendly, providing all the basic effects that you’re likely to need and offering plenty of opportunities for different combinations so that you can get the sound you want. This amp is easy to use and rewarding to play with!

You also won’t have to worry about longevity or durability with this great little amp since it offers all the dependability that Fender is known for. This amp will hold up against long hours in the practice room or bumps on the road without noticeable wear or sound degradation over time. Rest assured that the Champion 40 is an amp that you can trust for years to come!

Blue Spark Mic Review – To Buy or Not to Buy?