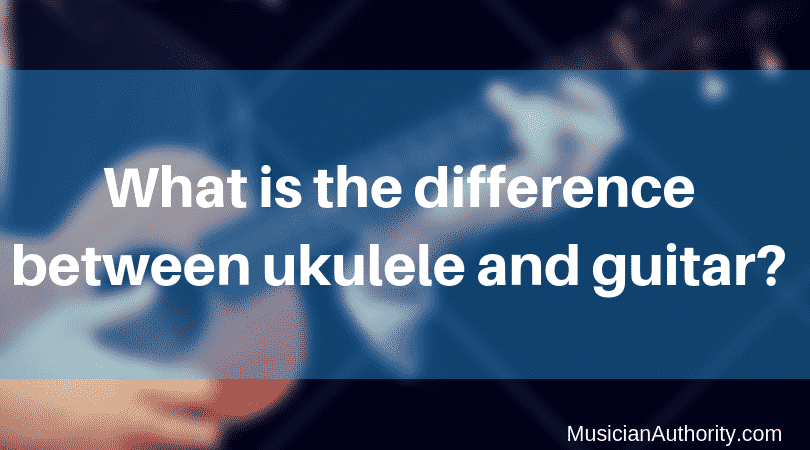 The ukulele is the guitar’s younger brother and like all siblings, they are similar in some ways and different in others. There are several things to take note of if you’re wondering about buying a new instrument or switching to one from the other.

What is the difference between ukulele and guitar? Compared to the guitar, the ukulele is smaller, has fewer strings and produces a lighter, brighter sound. But in other ways such as tuning and right hand technique, the guitar and the ukulele can actually be quite similar.

Let’s compare the two instruments and see what the results really mean for you.

The ukulele is obviously much smaller than the guitar. The scale lengths (that’s the maximum length of a vibrating string) of guitars range from 24 inches to 25.5 inches. That of a standard soprano ukulele, on the other hand, is 13 inches.

In practical terms this means that the frets are much closer together compared to the guitar, so playing basic chords on the ukulele requires less of a stretch. If your hand is larger than most, however, you might struggle with the accuracy of your left hand fingers (at first).

This means that it’s easy to carry around and much, much easier to travel with. If you have ever tried to fly with a guitar you know how difficult airlines are making it to keep our instruments safe. There’s none of this hassle with a ukulele!

The strings of the acoustic and electric guitars are made out of steel. Compared to their ukulele nylon counterparts, steel strings are harder and require a lot more finger strength. If you’ve played the acoustic guitar before, you know that it takes time to build that strength. In this respect, the ukulele puts less strain on the musician’s hands.

The ukulele is also simpler in that it has only 4 strings compared to 6 of the standard guitar. At most, we can only play 4 notes at a time on the ukulele. This means that memorizing chord shapes is easier because they consist of fewer notes, barré chords are simpler to execute for the same reason and it’s also quicker to switch between chords.

Speaking of strings, we must also compare the crucial matter of tuning. The standard tuning of the guitar from lowest-sounding string to highest is: E2 – A2 – D3 – G3 – B3 – E4.

The tuning of the ukulele family is not that different:

Secondly, the tuning of the other ukuleles follows the same pattern. The difference is that they are transposed (moved) up a fourth. In other words, the open strings of the soprano, concert and tenor ukuleles are like the guitar starting on the fifth fret.

The similar tuning means that many guitar chord shapes are the same on the ukulele. You will simply have to get used to where each particular chord goes. Easy, right?

Fun Tip: If you have a guitar, put a capo on the fifth fret, limit your playing to the top four strings and you’ll get close to what a ukulele is.

The reason is that like the classical guitar, the ukulele has nylon strings and is similarly played by the fingers and the fingernails. This technique of plucking the strings will be completely new to those who are used to playing only with the pick.

In short, the right hand technique on the ukulele goes like this:

The thumb, index finger, middle finger and ring finger are named with letters p, i, m, a respectively. (The origins of these letters are the fingers’ names in Spanish: pulgar, indice, medio and anular). Finger ‘p’ (that is, the thumb) is used to pluck the lower strings while the rest of the fingers maneuver the top ones.

With fingerpicking, we can play 2 or 3 notes together using strings that are NOT next to each other. While this comes naturally on the ukulele (and the classical guitar), it’s not so typical on the acoustic or the electric guitars. Also playing fast notes on strings that are further apart (such as the highest and lowest ones) is really simple when plucking but quite a challenge with the pick!

Strumming is also performed by the fingers rather than with a pick. And since it’s a combination of thumb and index, it requires more precision to do well. At the same time, this type of strumming allows for more possibilities like that of the traditional Spanish Flamenco.

So in general, the styles of music that come second nature with fingerpicking are very different than those that use the pick. Not only that but clearly, playing with the fingers produces a different sound than playing with a plastic pick.

Prices for guitars and ukuleles range drastically from a few bucks for entry-level instruments to thousands for professional quality. Generally, though, you can get a great sounding ukulele for less than you would spend for the same quality in a guitar. Here are 3 ukuleles for beginners you should consider. These instruments sound great but aren’t expensive:

Should I learn guitar or ukulele first?

If you are new to playing instruments and are considering which one to play between guitar and ukulele, it’s recommended that you start with the ukulele. It will teach you how the fretboard works and it will give you a really good idea of how to produce sound on a plucked string instrument.

A good alternative if you have the time, is to learn both instruments at the same time! Contrary to what some people might say, it won’t confuse your technique for either instrument – it will actually help as it gives your hands (and your brain) a varied musical workout! There are tons of other musicians that do this. Violinists often pick up the slightly larger viola and get used to it in no time. Flutists are often employed in orchestras to switch between the standard flute and the much smaller piccolo.

Is the ukulele easier to learn than guitar?

Now having compared the ukulele to the different kinds of guitars, what’s the conclusion? Which instrument is easier to learn?

First of all, let me just say that as musician and teacher for many years, every instrument has its unique challenges. At the same time, every musician is different: we have different sizes, proportions and strength in our arms, hands, fingers and so on. What others struggle with for weeks might take you just a few hours due to your natural dispositions to certain movements. (The opposite can be true too, of course).

But since, as we’ve seen, the ukulele is smaller, lighter and has fewer strings, it’s technically easier to get going. The instrument makes fewer demands on the musician’s hands.

Your biggest concern, however, should be the style of music you want to play. In the long run, what are you practicing for?

What styles of music can I play with the Ukulele?

The history of the instruments reveals a lot about what they were intended for and where they might be going. Let’s see:

The classical guitar has a long history of development as from antiquity up till it was established as a concert instrument in the European Renaissance. It was always known as either accompaniment to other instruments and singers, or as a solo instrument in its own right. The sound of the classical guitar also made its way into film music, where its mellow and perhaps melancholic timbre is often employed in romantic or tender scenes.

The final big development, of course, is the electric guitar, which as we all know is a mainstay in rock, metal, jazz, pop and so on.

On the other hand, the history of the ukulele is peculiar. You can read the fascinating story here but in short, it was the creation of Portuguese immigrants in Hawaii. Thanks, in part, to the Queen’s enthusiasm for the instrument, the ukulele eventually became synonymous with traditional Hawaiian music.

Now thanks to recent pop music hits such as Jason Mraz’ I’m Yours, the ukulele has seen a huge spike in new interest. TV and radio advertising are often featuring the happy, bright ukulele sound prominently. YouTubers such as Feng E. are rising ukulele solo stars playing originals and solo arrangements.

It seems that it’s only a matter of time before the ukulele sound starts making its way into all types of music and all kinds of ensembles. All in all it’s a really exciting time to start learning the ukulele right now!